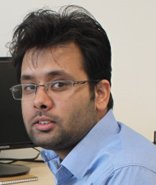 Jay Prakash received Bachelors in Electronics Engineering from Indian Institute of Technology (IIT) BHU, Varanasi, India in 2013. Hes has been exploring wireless communication after his introduction to Software Radios (SDR) and Global Navigation system during his short internship with ISRO, India. He built upon the experience and designed improved SDR for GLONASS and COMPASS systems during his bachelors research.